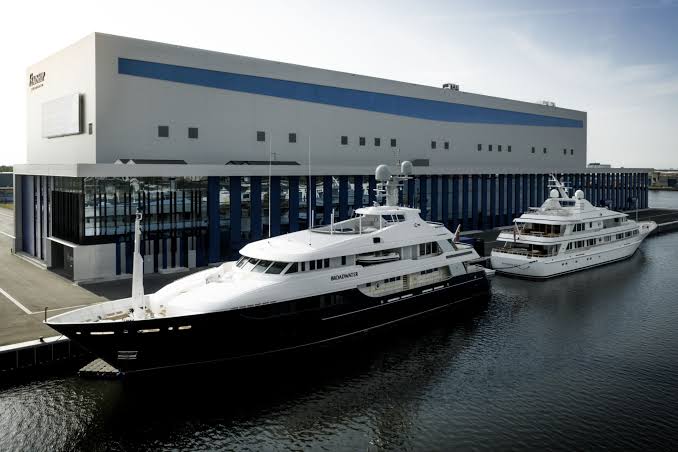 With an interior and exterior design by Donald Starkey, and built in aluminium by Dutch yard Feadship to Lloyd’s class and MCA compliancy, with delivery in 2002, Broadwater has been carefully maintained to the highest standards and underwent a full exterior repaint along with interior upgrades in 2013. Her original build specification called for a seaworthy yacht capable of cruising anywhere in the world including the shallow waters of the Bahamas.

The large deck areas on this yacht for sale offer plenty of spaces for sunbathing, evening cocktails or a meal under the stars. The bridge deck has a cosy lounging area while the sun deck offers a sheltered bar, barbecue grill, sunbathing area and a large Jacuzzi spa tub.

Broadwater has very versatile accommodation for 12 guests in six cabins. The full-beam master suite lying forward on the main deck has a white onyx en suite bathroom and an adjacent office and gymnasium. Guest accommodation on the lower level has flexible arrangements, as the two forward guest cabins and the two aft guest cabins are each equipped with sliding doors, allowing the option for two large VIP suites. These suites lead out into the guest lobby with full access to the wet bar, steam room and sauna. An additional guest cabin can be used for staff.